The year is only a few weeks old and already I’ve recommended Gretchen Rubin’s fantastic book Better Than Before to several people who want to change their lives in small and meaningful ways. I really enjoyed this book when I first read it in 2015, and again when I reread it recently: Rubin explores the science behind forming and maintaining habits, reasoning that establishing patterns of behaviour as habits makes it easier for most people to achieve daily goals, because they no longer have to expend much mental energy on choosing to behave in a certain way. Her rationale is that, like we don’t need to put any effort into brushing our teeth twice a day – it’s just a habit – we can develop similar habits in all areas of our lives.

A key element of her book is what she describes as the Four Tendencies: four personality profiles that shape how people respond to internal and external expectations. They are: Upholders (who find it easy to meet their own goals, and the broader ‘rules’ of society); Questioners (who find it easy to meet their own goals, but only worry about other people’s rules if they believe that they’re sensible and relevant); Obligers (who always strive to meet other people’s expectations, but sometimes struggle to meet their internal goals unless they can externalise them – like having a running partner to ensure that you stick to a running plan); and Rebels (who don’t want to be tied down by their own goals, or anybody else’s rules. I really urge you to seek out this book and learn more about it all (and also listen to Rubin’s podcast, which is excellent, and follow her on Facebook, and read her blog). Better Than Before is full of useful strategies for establishing good habits (and dropping bad habits), tailored to work with your ‘Tendency’.

Today I want to talk about an idea that Rubin discusses, because it resonated with me when I first read Better Than Before, and continues to make sense to me. Essentially, she challenges the accepted wisdom that attempting to totally give up something – particularly in the case of trying to eat healthily, for example – is doomed to fail, and that moderation is key. Rubin’s response to this idea is that moderation works for some people, but that for many others total abstinence is easier. Her rationale is that abstinence actually takes far less mental energy than the effort required to decide how much moderation is enough. Here’s an extract from Better Than Before that explains her perspective:

Within the study of habits, certain tensions reappear: whether to accept myself or expect more from myself; whether to embrace the present or consider the future; whether to think about myself or forget myself. Because habit formation often requires us to relinquish something we want, a constant challenge is: How can I deprive myself of something without feeling deprived? When it comes to habits, feeling deprived is a pernicious state. When we feel deprived, we feel entitled to compensate ourselves – often, in ways that undermine our good habits.

I realized that one way to deprive myself without creating a feeling of deprivation is to deprive myself totally. Weirdly, when I deprive myself altogether, I feel as though I haven’t deprived myself at all. When we Abstainers deprive ourselves totally, we conserve energy and willpower, because there are no decisions to make and no self-control to muster.

Abstaining is a counterintuitive and non universal strategy. It absolutely doesn’t work for everyone. But for people like me, it’s enormously useful.

As an Abstainer, if I try to be moderate, I exhaust myself debating: How much can I have? Does this time “count”? If I had it yesterday, can I have it today? In Oscar Wilde’s novel The Picture of Dorian Gray, a character remarks, “The only way to get rid of temptation is to yield to it,” and it can be a relief to give in, to end the tiresome mental chatter about whether and why and when to indulge. But I’d discovered, abstaining cures that noise just as effectively. I’m not tempted by things I’ve decided are off-limits. If I never do something, it requires no self-control to maintain that habit.

This was a bit of a revolutionary concept for me, but it totally appealed to my Upholder nature: I’ve always enjoyed giving stuff up, because I like reminding myself that I control my body and my life, and am not in thrall to anything or anybody else. So, last summer, I gave up my drug of choice: 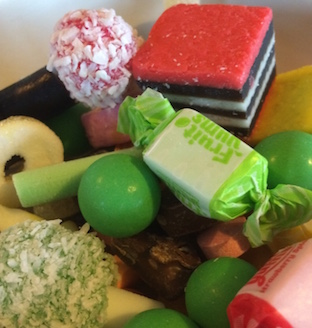 And I discovered that Rubin was right: it was FAR EASIER to just never eat sweets, rather than endlessly trying to moderate my sweet-eating (I really love sweets). I didn’t go all hard-core and “I QUIT SUGAR!!” about it (in other words, I wasn’t religiously reading lists of ingredients when buying loaves of bread), but I stopped eating things that were obviously full of sugar: sweets, chocolate, soft drinks, fruit juice, cakes, biscuits, and all desserts and puddings. I also tried to eat less fruit and more vegetables.

This was a hugely successful strategy for me: I lost four or five kilos, which was nice, but more importantly I gained a huge amount of energy as my blood sugar stopped climbing and plummeting in response to what I ate. I found that, as time went by, my typical eating each day involved a lot more protein and vegetables, and that it was no hardship at all to eat in this way.

But… during 2016 my university year was horrendous, and I started comfort-eating sweet stuff occasionally. And then a little bit more often. And then nearly every day. And then daily. And it confirmed for me that I am not a Moderator: I love sweet food too much to be able to control myself. ‘A bag of sweets on Friday night’ would turn into “Oh – we’re going to the cinema, so I’ll have my bag of sweets on Tuesday this week”, and then Friday would arrive and I’d have that bag of sweets again – plus a hot chocolate nearly every day, and biscuits if they were around. The outcome has been the return of those four or five kilos I lost, and while that’s not a drama (I’m a healthy weight at either end of that particular equation), I know that my body doesn’t function well when I eat too much sugar: I don’t sleep well; I get more tired; I have digestive issues… really, sugar IS a drug for me, and not a good one.

So I’m on my third day of my return to sugar abstinence, and this time I’m determined to stick with it. The whole situation has reminded me of something else Rubin has written in the past, about how having a slip-up is sometimes necessary in order to remind you about what works for you. And if you’ve also struggled to control your consumption of something, maybe you might want to try the Abstaining approach too, and see if ‘deciding not to decide’ works for you.